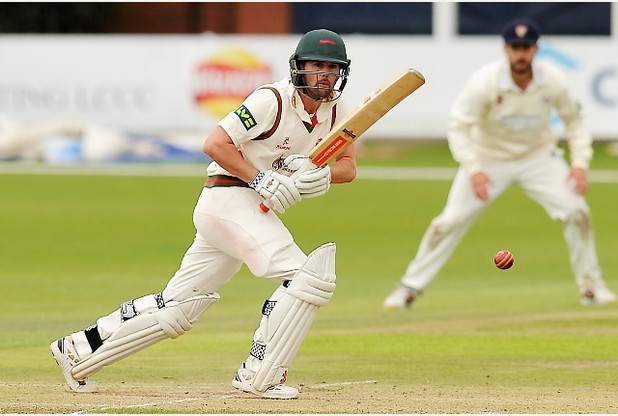 Batting was the order of the day at Riverway as Stafford played out a high scoring draw with leaders Leycett on what proved to be a great track to bat on. Leycett won the toss and chose to bat first in this Division 2 clash and put on a mammoth 288 run unbeaten opening partnership in 48 overs. Former Derbyshire batsmen Dan Redfern dominated with 165 not out in only 134 balls which included 30 fours and a six. David Speakman played the supporting role his fine knock totalled 113 not out. There was some rain delay where some overs were lost and Stafford had to bat out 57 overs. The home side didn’t look like chasing down that huge target but opener Guy Seaton steered them to safety with a gutsy 97 in 159 balls. Stafford eventually closed comfortably on 176-6 just claiming the maximum batting points. Andrew Cooper claimed 3-49 for the visitors. Skipper Rob James said   “We knew all about Dan Redfern’s qualities before the match – he’s played a lot of first class cricket and we knew what he was capable of. To score an unbeaten 165 takes some doing although we had a couple of chances to get him.  After the rain delay the best we could do was to get maximum batting points and not get bowled out. Fair play to the lads – we were never in trouble and Guy has batted superbly for us – shame he couldn’t see it through to his hundred as he deserved one. We’ve not had a bad start to the season and we’ve proven to be difficult team to beat”  Stafford are back in action this Saturday when they travel to Cheshire to face Weston.

The seconds lost out by six wickets as they travelled to Knypersley in Division four. Stafford were asked to bat first in tricky conditions and left hander Paul Wilkins used his experience to hit a classy 83 which after a tricky start and lead the visitors to a respectable 162-9 in their 50 overs. Stafford bowled well early on with Matt Jefferson and Joe Rowell picking up a couple of wickets each before Ashley Rogers hit an unbeaten 50 to steer his side over the line in 39.1 overs. Stafford face Moddershall & Oulton this Saturday with a 1-30pm start at Riverway.

Stafford thirds lost out in a close game against Crewe seconds in Division 7 by 23 runs. Crewe were 156 all out batting first as Alex Meakin hit 90 not out. Paul Freeman 4-51 and  Kieran Duggal 4-42 were in the wickets for Stafford.  In the reply they fell just short after Ian Young  top scored with 32.  Ryan Halliwell’s 4-37 proved crucial as Stafford were all out for 133 falling just short.