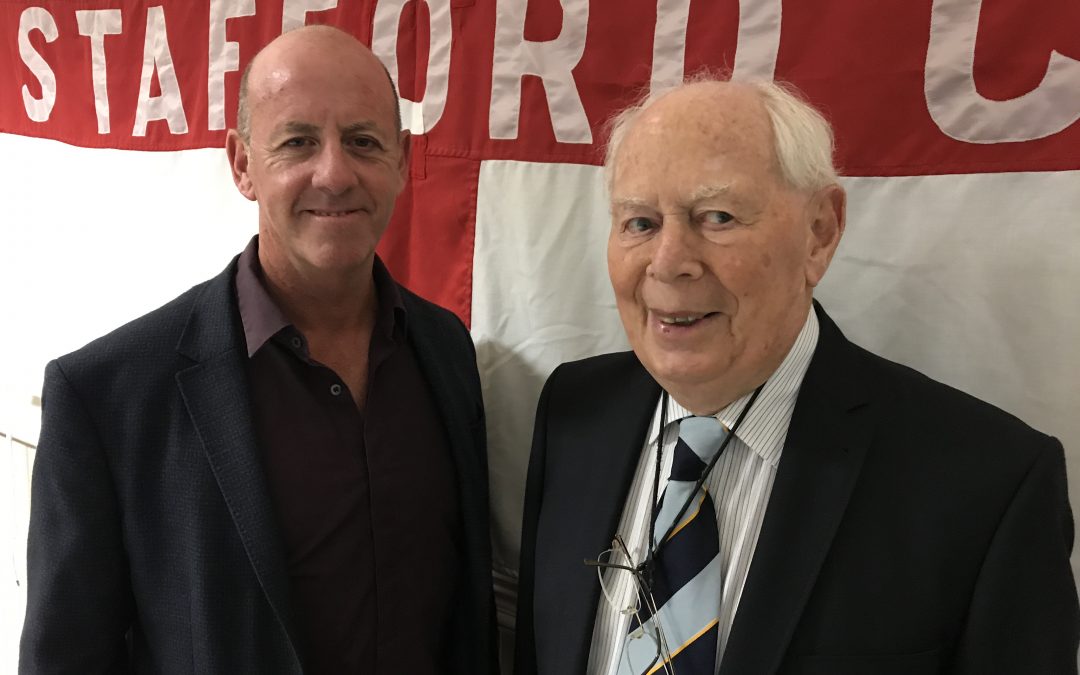 The Analyst Simon Hughes & Dennis at the recent Sportsman’s Dinner

It was a good weekend down at Riverway as all of Stafford’s top 3 sides recorded fine victories.

Australian seamer Luke Morien was the star as Stafford picked up an important win batting second on their travels to Meir Heath. The home side were dismissed for 118 after winning the toss and batting first. Experienced swing bowler Graham Beardmore got the away side going taking three wickets with the new ball. Meanwhile Morien, who bowled 18.2 overs straight through, got to work in a fantastic spell which included 4 wickets in 7 balls.  He finished with figures of 7-56 thanks to some fine work in the slips from skipper Rob James and Ashley Lunn. Sam Wilcox (28) batted well for Meir Heath who struggled to cope with Stafford’s seamers. In the Stafford reply it was over to Aqib Afzaal who set the tone with a quickfire 40 including 8 boundaries. Austen Crump showed some fight for the home side picking up 3 wickets in a good spell. However, Rob James then chipped in with 19 and Umar Zamman’s composed 16 not out ensured Stafford left with the win, completing the run chase in just 26 overs for the loss of five wickets.  Stafford will be hoping to continue their good form at home to Porthill Park 2nds next Saturday with a 1pm start.

The seconds picked up a crucial victory at home to Hem Heath in Division four after a big run chase.  The visitors batted first hitting 242-6 on a decent batting track. Stephen Atkinson’s 97 dominated the innings as Paul Freeman 3-56 was the pick of Stafford’s attack.  The run chase proved a real team effort as Mark Evans 37, Martin Brazier 47, Paul Wilkins 40, Craig Mertins 36 and Ethan Sheriff 40 all contributed superbly as Stafford got home with 3.1 overs to spare for the loss of 6 wickets. Chris Wright picked up 4-74 for Hem Heath but this win sees Stafford lift off the bottom of the table after 2 straight wins as they travel to Bignall End on Saturday.

In division 7 the thirds won at Moddershall and Oulton after the home side hit 175-7 in 50 overs. Stephen Powell top scored with 68 not out as Matt Jefferson, Becky Williams and Ashish Bhan all claimed 2 wickets each. Bob Singh dominated Stafford’s reply with 84 from 130 balls then Jefferson, Bhan and Tony Milner all contributed with late runs to see them over the line despite losing 8 wickets on route.

The Academy XI lost out to Porthill Park 4th XI after they hit 272-4 declared. Stephen Richardson 152 dominated with the bat. Stafford attempted to bat out for the draw in the reply but were unfortunately dismissed for 145 in the 51st over. Skipper Ali Martin carried his bat with 46 not out.