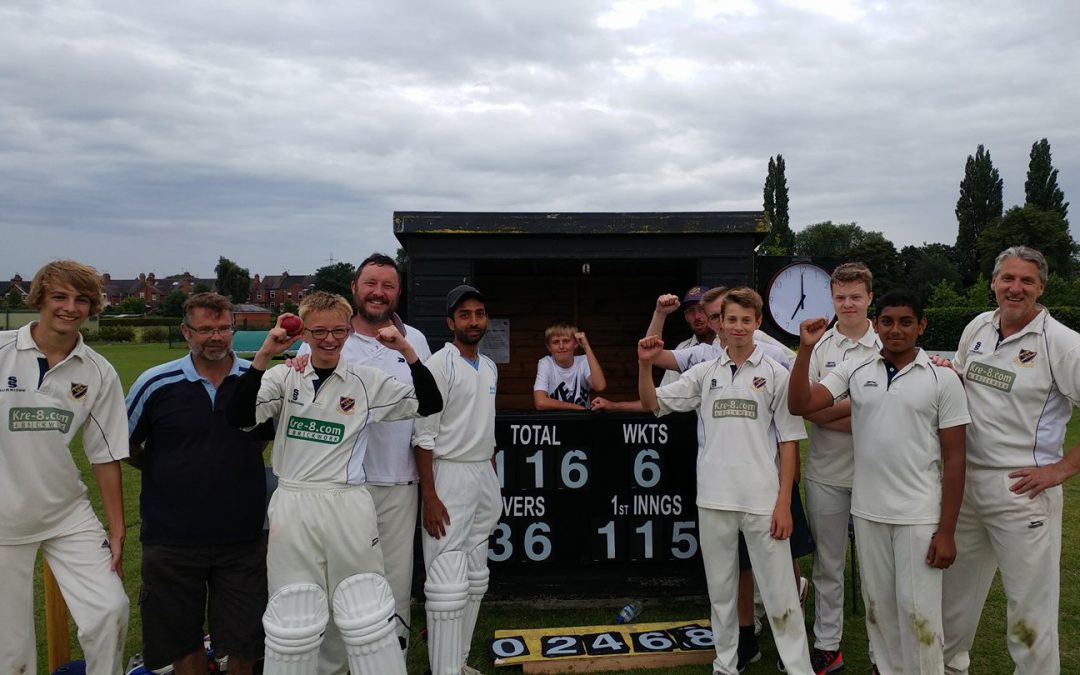 Stafford lost out in yet another close game in Division 4 when they travelled to Bignall End and lost by 1 wicket in a low scoring game. Batting first Aqib Afzaal hit 55 top scoring in Stafford’s innings of 135 all out. Skipper Rob James chipped in with 20 as Simon Howle claimed 5-15 for Bignall. The home sides professional Arsalan Arshad with 72 not out then dominated the chase and Stafford just could not dismiss him  despite claiming 9 wickets. The opening pair of Graham Beardmore 4-14 and Luke Morien 4-76 claimed the wickets but they just couldn’t get the crucial final wicket as Bignall got home in 44.5 overs. This Saturday Stafford are at home to Rode Park and Lawton with a 1pm start at Riverway.

In division four Stafford 2nds continued their improved form with their fourth straight win at home to Sandon. Stafford’s 2 wicket win sees them move out of the bottom two relegation spots. Sandon were asked to bat first and were bowled out for 150. Ethan Sheriff 3-27 claimed the early breakthroughs  before Paul Wilkins 5-25 mopped up the tail. In between there was a good partnership by Shawn Hunt 38 and Greg Swanwick 53 and Saj Fernandoupollu hit a late 31. Wilkins 29 and Terry Jones 26 had Stafford in control in the reply before Mark Attwood’s 5-26 put them in trouble. It was then left to last week hero Jack Scerri to steer his side home again with 47 not out batting at nine. He finished the job in 44.2 overs with his side 8 wickets down. Stafford travel to mid table Audley on Saturday hoping to continue this good run.

The thirds lost by 4 wickets at Betley in Division 7 after hitting 214-9 in their 50 overs. Sean Mason top scored with 58 with Bob Singh 33 and Ashish Bhan 27 not out contributing well. James Hancock claimed 3-31 for Betley. In the home side’s reply James Sandlands hit 62 and James Austin 37 not out to see them over the line in 46.2 overs with 6 wickets down. Andy Kirkbride claimed 3-41 with his leg spin.

The Academy XI had a great day winning their first game of the season in Division 8 at home to Onneley and Maer by 4 wickets. The visitors were rolled out for 115 thanks to a fine spell of seam bowling by young Oscar Bell. Bell showed his potential with 5-13  in 7.5 overs as Jamie Gannon top scored with 33. Stafford’s experienced pair of skipper Ali Martin 25 and Trevor Stewart  33 not out scored vital runs in the chase. Stewart and Chris Bell 17 not out saw them to glory in 37 overs. This win had been coming after several improved performances and the youngsters will look to continue this on Saturday as they travel to Newcastle.