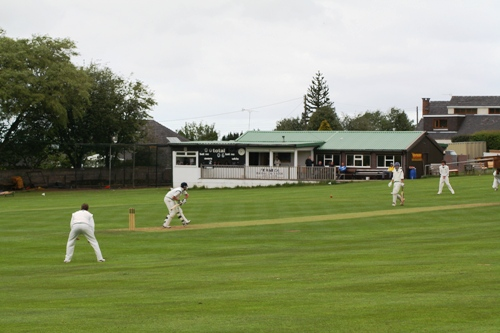 Stafford had a difficult start to the 2018 season with a heavy defeat at Woore in division two of the North Staffs and South Cheshire league before bowing out of the Talbot Cup at home to Cheadle on the Sunday. On Saturday Woore batting first were 129-7 before Kyle Morgan hit 42 not out at number nine to take them to 195-9 in 55 overs. New Zimbabwe professional Tino Mafusire claimed 3-23 & debutant Haris Hussain 3-45 which impressively included a hatrick. Stafford aimed to bat out for the draw in the reply but fell to 86 all out 3 overs short of saving the game. Guy Seaton top scored with 26 as Tas Hussain claimed 5-9 for Woore.

Sunday saw a 7 wicket defeat in the Talbot Cup against Division one side Cheadle. Ashley Lunn 25 and Martin Brazier hit 24 in Stafford’s 112 all out before Cheadle eased home losing just 3 wickets. Stafford will look to bounce back at home to Porthill Park on Saturday with a 12-30pm start at Riverway.

The seconds also lost their first game at home to Meakins in division 5 after being bundled out for 71 by Dave Edwards 5-15. Sean Mason top scored with 22. Stafford did better in the field but Meakins got home for the loss of 4 wickets

The thirds in division 7 had a winning start at home to Wedgwood by 23 runs. In slow scoring conditions Stafford hit 137-9 batting first thanks to the middle order of Brad Evans 21 Terry Jones 29 and Mike Goodman 24. Simon Smith claimed 5-30 for the visitors. In the reply Wedgwood had a steady start before Evans 3-14 and Dane Beardmore 5-38 got in the wickets when they tried to increase the run rate. Wedgwood were 114 all out.

The young academy side lost by 6 wickets at Oakamoor. Skipper Ali Martin hit 51 not out in their 88 all out before the home side got home losing 4 wickets on route. Oscar Bell bowled well claiming 2-18 from his 8 overs as Harry Smith hit 53 not out.