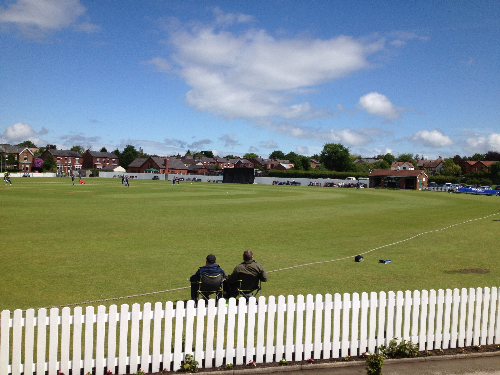 Stafford firsts had a disappointing trip to Silverdale losing early by 6 wickets after being dismissed for only 74. Luke Morien top scored with 27 but they struggled against the spin of Zahid Mansoor 4-14 and Scott Degg 4-12.  Professional Mansoor then got his side home with the bat with an unbeaten 34 not out. Stafford did pick up 4 wickets, 2 each for Graham Beardmore and Tino Mafusire. Stafford will look to bounce back as they travel to Leycett this Saturday when they start at 12-30pm.

In Division 5 the seconds picked up their first win of the season under the captaincy of Chris Dobson with a maximum 25 point home victory over Maer and Onneley. The visitors chose to bat first on a good Riverway wicket and Stafford did really well to restrict them to 179-9 in 45 overs. Max West top scored with 56 as Craig Mertins was the pick of a good all round bowling performance with 3-57. In the reply openers Mark Evans 36 and Karl Mason 35 put on 65 for the first wicket and then Sean Mason with 47 and Jamie Wood 40 not out completed the job with 4 overs to spare to take Stafford to a 5 wicket win. The seconds are at home again this Saturday with a 1pm start at Riverway against Elworth and will look to continue this form.

The thirds also won batting first at home to Norton in Hales by 63 runs. Stafford hit 217-6 declared in 41.1 overs thanks to fine knocks by Brad Evans 45 and Jack Scerri 60. Captain Dan Howe 28 and the in form Ashish Bhan 36 not out played supporting roles. Norton in the reply were skittled out for 154 in 43 overs. Captain Gary Rudd top scored with 30 but it was the experienced Sean Connolly with 4-37 who claimed most of the wickets.

The 4th XI Academy continued their good start to the season with a seconds victory at Sandbach 3rds in division 8. Stafford were 114 all out with opener Oscar Bell hitting a patient 24 opening the batting and then Trevor Stewart upped the tempo with a quickfire 33. Sandbach struggled in the reply falling 23 runs short on 91 all out thanks to the experienced duo of Stewart 4-17 who had a fine game and Chris Bell 3-4. Left armer Harry Mellor also got in the action picking up vital early wickets with 3-24.