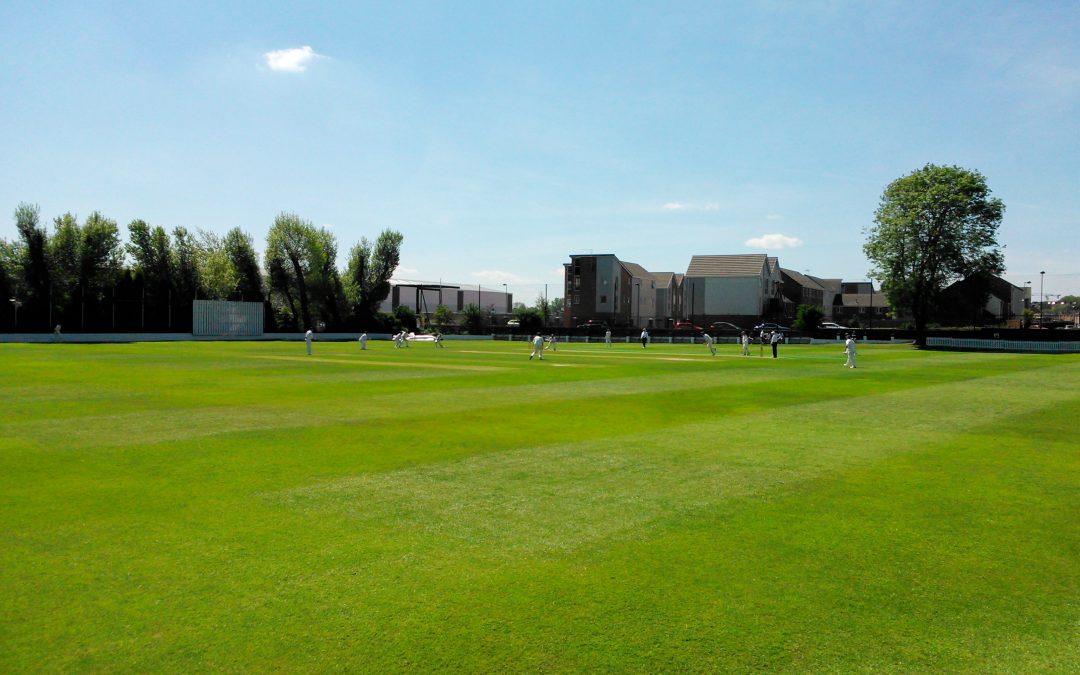 Stafford miss out with surprise defeat

Stafford CC lost out on their travels to Meakins CC 2nd XI by 40 runs in a low scoring game on a green wicket. Meakins CC elected to bat and at 92-2 seemed set for a high total. Then the wickets came falling with Luke Morien (4-34) and Tino Mafusire (3-21) combining well to see Meakins fall to 142 all out with Mark Graham (23) top scoring for the home side. With a modest total in sight Stafford’s top order fell with everything going Meakins way including some bizarre umpiring decisions which left many puzzled. Despite early setbacks, Tino Mafusire (38) looked set to take Stafford to victory with good support from Martin Brazier whose 26 from one over got the run chase back on. However wickets continued to fall and another poor umpiring decision left Stafford short at 102 all out. Stafford are looking to bounce back at Sandyford CC next Saturday.

Stafford CC 2nd XI contested a remarkable tie at home to Burslem 2nd XI in Division 5. Ryan McIntyre (89*) helped the visitors to 176-7 with Sean Connoly, Paul Freeman and Ashish Bahn picking up two wickets apiece. Dave Cartledge (72) laid the foundations for the run chase but wickets fell in a game that ebbed and flowed. Junaid Quereshi (3-34) and Syed Haider Bukhari (3-43) toiled hard for Burslem but the experienced Connoly scampered a quick single to level the scores from the last delivery as the hosts finished on 176-8.

Stafford CC 3rd XI lost out to Leigh CC 1st XI in the last over in another tense finish at Riverway on Saturday. Leigh made the most of their decision to bat first amassing 229-6 declared thanks to some fine batting from Greg Faulkner (89) and Rob Flowers (69). Sam Haynes (3-45) Impressed with the new ball whilst spinner Andrew Kirkbride picked up two wickets for Stafford.  The run chase was very much on for Stafford with Mark Evans (30), Michael Goodman (32), skipper Dan Howe (30), and Kirkbride (44) in no mood to lay down. However, with all three results possible it was Faulkner (3-45) who curtailed Stafford hopes as they fell for 204 all out despite the best efforts of the lower order.

Stafford 4th XI Academy earned a creditable draw with against a strong Audley 3rd XI on their travels. After electing to bowl, Stafford found themselves in a decent position with Audley at 86-4. However, Eddie Smith (51*) was supported well by skipper Andrew Forster (78*) whose belligerent innings came from just 58 deliveries and included 5 sixes as Audley declared on 205-4. Trevor Stewart, Oscar Bell, Jake Stewart, and Matthew Green all claimed a wicket each. 15 year old Oscar Bell (31) got Stafford off to a good start but it was up to veterans Trevor Stewart (23*) and Chris Bell (31*) to hold out for a draw as Stafford closed on 152-7.