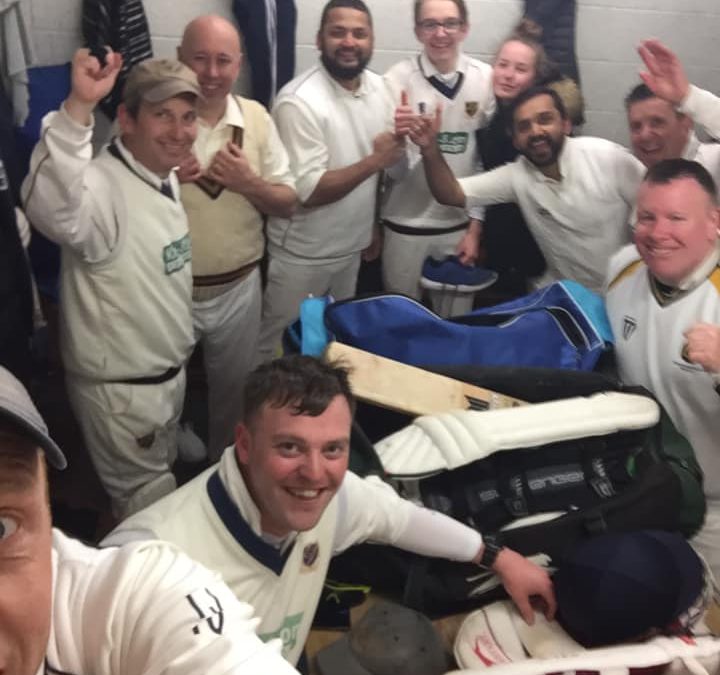 First Winning Selfie of the Season From the 2nd XI

After last week’s wash outs Stafford started their Division 2 campaign in the North Staffs and South Cheshire league with a disappointing defeat at home to Norton in Hales. Stafford had several newcomers in their ranks and the visitors chose to bat first and hit 199 all out from 54.3 overs. New overseas West Indian Vishaal Maharaj blossomed with his leg spin claiming 6-71 on his debut but skipper Jack Furnival top scored with 57 to give his side a respectable score. Ashley Lunn who was stand in captain for the day top scored with 37 but Stafford were bowled out for 94 as Chris Dyer caused the main damage. Stafford will look to bounce back straight away this weekend as they travel to Kidsgrove on Saturday and Hem Heath on Sunday in the Talbot Cup and skipper Rob James returns to the side.

The seconds under the new leadership of Terry Jones got off to a winning start at Burslem in division 6 where a good all round team performance saw them win by 67 runs. Batting was tricky on a slow wicket and debutants Mansoor Hussain 19 and Ali Siddiqi 41added a vital partnership before Gary Fulton 23 not out batted with the tail to steer them to 132-9 in 45 overs. Stafford experienced attack then got to work and the evergreen Sean Connolly was the pick with 5-28 as Burslem were 65 all out in 31.5 overs. Stafford entertain Woore this Saturday at Riverway with a 1pm start.

The thirds lost out at Kidsgrove in division 7 in a low scoring encounter by 16 runs. They performed well in the field as the home side were shot out for 82 as Matthew Green 3-31 and James Peate 5-8 were in the wickets. Ben Bennett top scored with 22. In the reply Stafford were going well thanks to Brad Evans 21 and Dan Howe 27 but once they were dismissed the side painfully collapsed to 66 all out with no one else reaching double figures. Connor Devine with 5-13 was the pick for Kidsgrove

The fourths lost narrowly by 2 wickets at home to Oakamoor. Amol Karki hit a fine 62 on debut for Stafford and was well supported by wicket keeper Matthew Turner 19 to take Stafford to 132 all out. Despite Phil Stacey claiming 4-35 in the reply the visitors just got home in 26 overs after losing 8 wickets. Jacob Fullick with 37 top scored for Oakamoor.

The Sunday side under the new leadership of Ethan Sheriff had a fine win in the Lichfield and District league Division 2 clash at Lullington Park. Batting was clearly the order of the day as the home hit 283-3. Alex Cooper hit a quality 133 not out and Joe Eaton 88 not out. In the reply Sheriff lead from the front hitting an unbeaten 110 to steer his side home with 2.1 overs to spare. Left hander Graham Gillis with 92 had upped the tempo before Vishaal Maharaj with 31 not out joined his captain at the crease and completed the job. Stafford closed on 285-2 to win by 8 wickets.