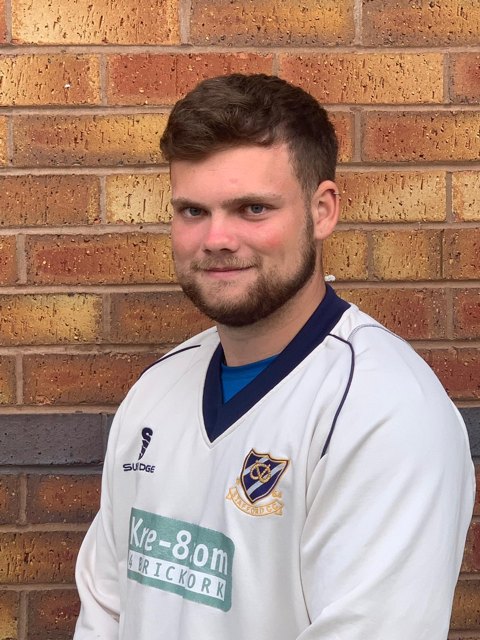 Ethan Sheriff continuing his good form with the bat

Stafford CC firsts continued their improved performances with an impressive winning draw against local rivals Barlaston at Riverway. Stafford piled on the runs thanks to the returning Shawn Hunt (72), in form Ethan Sheriff (50) and Ashley Lunn (44) finishing on 245-7. Mitchell Bromley (4-55) was the visitor’s biggest threat. Barlaston hung on for a losing draw closing on 196-9 thanks to Ben Grange (48), Khalid Malik (33) and skipper Jon Taylor (33) whilst left arm seamer Sabah Ghaus (5-54) and leg spinner Vishaal Maharaj (3-47) almost took Stafford to victory.

Stafford CC seconds came undone at Ashcombe Park CC seconds despite a magnificent century from Ali Siddiqi. Stafford batted first and ammased an reasonable 207-6 with Siddiqi (129 not out), signed from Milford over the winter, in fine form. Mansoor Hussain (33) provided the support whilst Grant Roberts (5-53) was more than useful with the ball. In the reply, 16 year old Oscar Bell (3-25) and Amol Kharki (3-54) impressed with the ball but Ashcombe successfully chased down their target for the loss of 8 wickets in the last over thanks to Nick Goodwin (77 not out) and Chris Bradstreet (59).

Stafford CC thirds picked up a win on their travels to Audley thirds on Saturday. Audley made 127-9 off their 45 overs with Finley Beswick (39) the only one who could get to grips with the impressive Kieran Duggal (6-24). Stafford then chased down their total for the loss of 6 wickets with Mark Evans (34) and Brad Evans (39) doing the damage. Andrew Forster (3-16) toiled in vain.

Stafford fourths continued their good form with a win at home to Crewe seconds. Stafford were indebted to Jake Bartlett (90) and Joe Glayshier (43) who helped Stafford to 226-6. Crewe never got going in reply thanks to Josh Williams (4-21) and James Peate (4-11) as they fell for 82 all out.