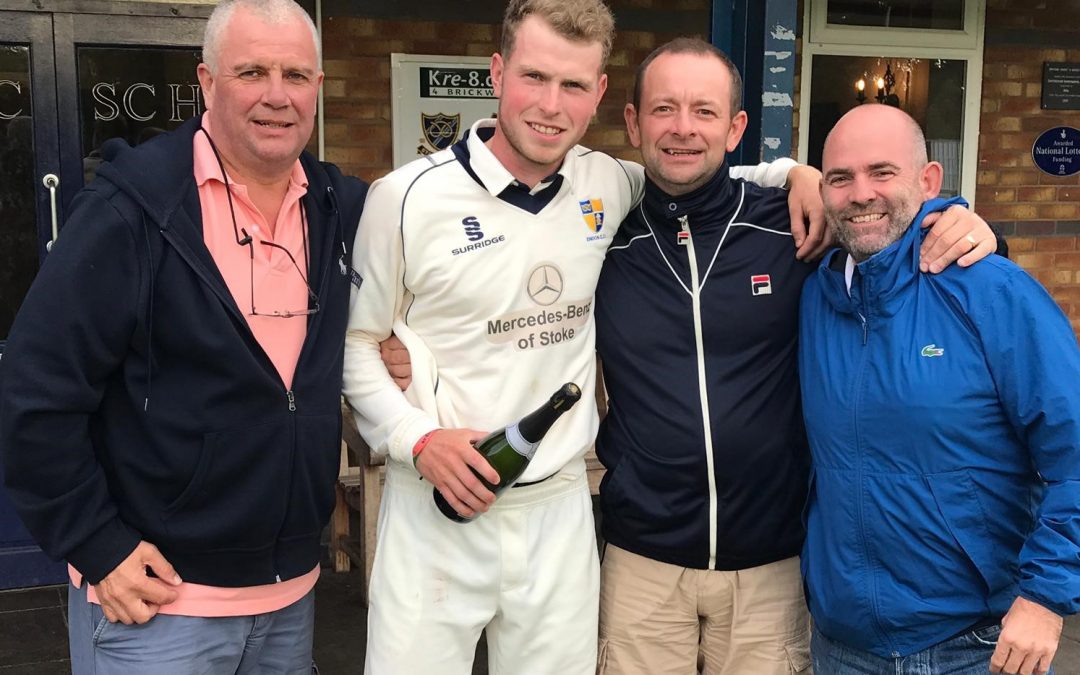 A big thank you to our match sponsors Michael James, Andrew Barraclough and Matthew Whitton for their continued support. Pictured presenting the Man of the Match award to George Sellers of Endon Cricket Club.

Stafford CC firsts slipped to defeat against league leaders Endon CC on Saturday. In a reduced overs game Stafford made early inroads and had the visitors rocking at 89-6 with Ramiz Patel (4-26) on top form. George Sellers (64), who was dropped on nought, had a crucial partnership with away skipper Marlon Martin (31) which helped them to recover to 170 all out. Stafford were never at the races in the run chase as the top order crashed to 9-4 and only Ethan Sheriff (19) offered any resistance before the home side fell for 51 all out. Harvey Ault (3-11) and Jack Bourne (4-30) did the damage. Stafford remain fourth from bottom and look to bounce back at Barlaston this weekend.

Stafford CC seconds also had a disappointing week losing out on their travels to Caverswall CC seconds. Jak Hassel’s (76) was the mainstay in the home side’s 172-9 with Sean Conolly (3-12) the pick of the bowlers. Ali Siddiqi (33) and skipper Terry Jones (28 not out) offered hope, but Stafford wickets also fell and they were dismissed for 104 thanks to Richard Brooks (3-19) and Craig Royce (3-21).

Stafford CC thirds lost out at Rode Park Seconds by 36 runs. Rode Park struck 104 all out with opener C Wilkinson (48 not out) in to form as Kieran Duggal (3-9) shone. Stafford were then bowled out for 68 with only Kannan Bhuvanachandran (22) offering any resistance to Oliver Clarke’s (4-14) fine spell.

Trevor Stewart (55) and Eddie Singh (49) put Stafford fourths on course for victory against Meakins fourths as 175-8 looked a winning score. However, Meakins held on for a losing draw as Trevor Stewart (3-14) capped a fine afternoon and Meakins closed on 108-7.