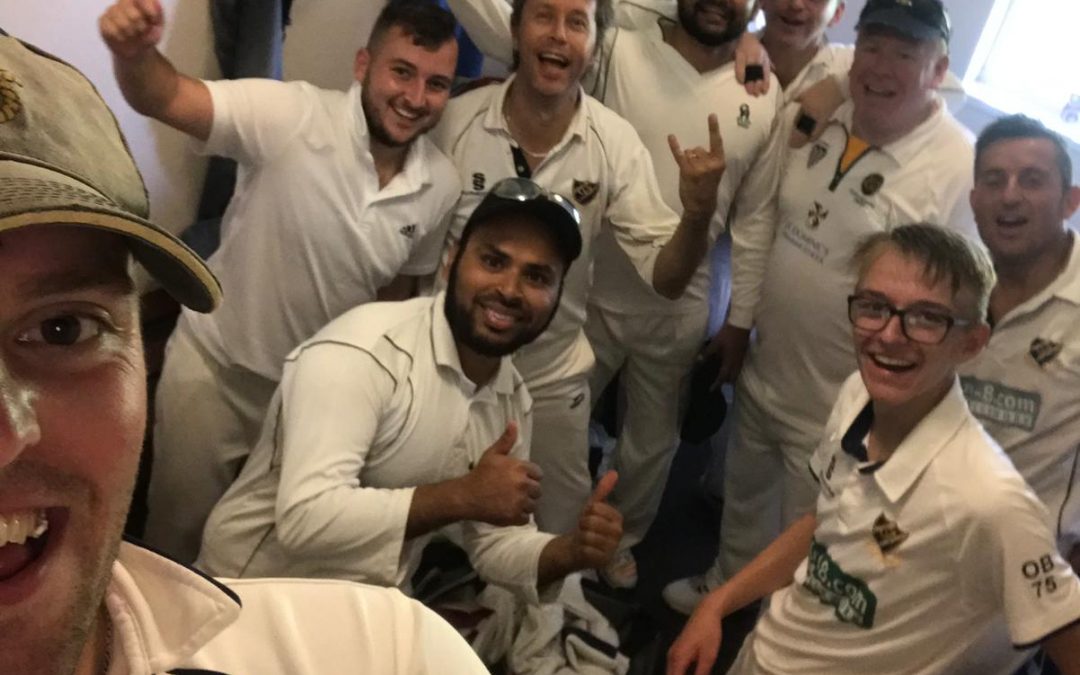 2nd XI continuing with their push for promotion

Stafford CC picked up a much-needed 181-run victory and maximum points in a game they dominated at home to fellow strugglers Meir Heath CC. The home side won the toss and elected to bat first and it proved a good decision as Guy Seaton (68) excelled as opener. He found an ally in Nepalese all-rounder Sonjaya Gurung (70) and skipper Rob James (27) was also in the runs in Stafford’s 227-6 off their 55 overs. Darren Weston (2-50) and Kieran Hollins (2-28) were the pick of the bowlers for Meir Heath. Stafford’s bowling attack was then on fire as they dismantled their rivals top order with aplomb. The impressive Ramiz Patel (5-11) and Sabah Ghaus (4-33) had the visitors 9 wickets down in no time before Paul Freeman (1-0) put the final nail in the coffin. Veteran wicket keeper Ian Young had a day to remember taking five catches as Meir Heath were reduced to 46 all out. Stafford face another crucial contest as they travel to Bignal End CC next Saturday.

Stafford Seconds travelled to Wood Lane 2nds looking to continue their strong run towards the end of the season. Martin Brazier’s fantastic 108 containing 7 sixes, along with support from Dave Cartlidge (46) helped Stafford to post 214-9 declared from 39.5 overs. John Litchfield (4-94) and Kevin Heath (2-14) took the wickets as the middle order failed to support the top order with a number of single figure scores. Wood Lane fell to 83 all out, with only Ian Wain (51) offering resistance for the home side. Four bowlers were used by Stafford, and all picked up at least two wickets with James Hughes continuing his good form with 3-20.

The seconds had a double game-week with a much-changed team at home to Ashcombe, who sat top of the table. Stafford struggled to 127 all out, with Ali Siddiqi (27) and Andy Kirkbride (24) the two batsman to post significant scores. Grant Roberts (4-21) and Jake Johnson (2-44) picked up the bulk of the wickets for the away side. Sean Connolly’s 3-35 gave Stafford hope defending a low total but Joe Byrne’s 68 helped Ashcombe reach the target in just over 35 overs. Stafford host Hanford this Saturday looking to return to winning ways.

Stafford Thirds still sit bottom of the table after a defeat away to Sandbach 2nd XI, after losing by 44 runs. The home side posted 176-5 thanks to crucial knocks from James Clifton (79) and Louwrens Verwey (55). Kieran Duggal (3-48) was the pick of the Stafford bowlers. Iain Atherton (30) and Dan Howe (31) offered hope in the run chase but Nathan Lewis (3-30) and Verwey (3-17) ensured Sandbach secured the victory. Stafford host Church Eaton 1st XI on Saturday looking to secure points in the fight to stay in the division.

Stafford Fourths lost at home to Sandbach 3rd XI in a low-scoring game to end a three-game unbeaten run. Sandbach batted first and posted 126 all out thanks to key contributions from Jack Boffey (36) and Andy Clifton (46). Matthew Turner’s superb 5-20 helped Stafford to reduce the away team to a low total. However, Stafford slipped to 86 all out in the run chase largely thanks to Chris Saunders (23) and Chris Charlesworth (26). Tim Hughes (4-23) and Tom Kesteven (5-31) ripped through the Stafford batting lineup to secure victory. Stafford travel to Church Eaton on Saturday looking to return to winning ways.