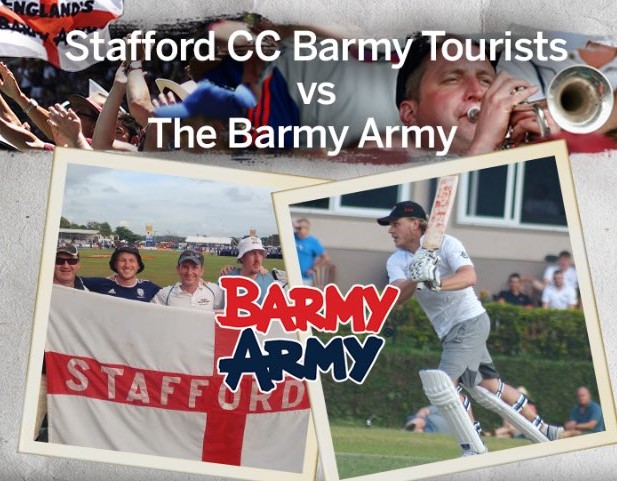 Stafford CC firsts picked up back to back victories with a comprehensive victory on the road at Woore CC. Woore elected to bat first and were bundled out for just 108 with Sabah Ghaus (6-38) and Paul Freeman (2-27) starring for Stafford. Craig Ruscoe (44) was patient as Stafford excelled in the field. In the reply, Ashley Lunn (52) was in no mood to hang around as his quickfire knock saw Stafford romp to victory for the loss of one wicket in 35 overs with Guy Seaton (44*) offering great support. Stafford, having waited for over half a season for their first win, now find themselves fourth from bottom and out of the relegation zone. They entertain table toppers Endon at home on Saturday with a 12:30pm start.

Stafford CC seconds picked up a winning draw in a thrilling match against Moddershall & Oulton fifths at Riverway. Stafford reached 180-7 thanks to Mark Evans (47), Ali Siddiqi (40), and Graham Gillis (51) with Sadeeptha Jayathilika (3-31) the pick of the bowlers. Paul Jackson (78) looked to have the visitors on course for victory, but Matt Jefferson (3-36) and Kumail Bokhari (3-28) fought hard for the home side. In a thrilling conclusion where all three results were possible, Stafford were left lamenting dropped catches as the visitors were 9 wickets down and 10 runs short. However, Stafford’s 16 points leaves them firmly in the promotion places as they look to bounce back from last year’s relegation.

Stafford CC thirds lost out to Endon CC seconds at home on Saturday. Stafford reached 179-9 from their allotted overs thanks to some fine striking from Andrew Kirkbride (78) whilst Bradley Spooner (3-40) and Andy Hopwood (3-32) were dangerous with the ball. It wasn’t enough for Stafford, despite the efforts of Kannan Bhuvanachandran (3-29), as Endon successfully completed the run chase for the loss of six wickets with Brad Hulme (78 not out) the mainstay of the innings.

Stafford CC fourths cruised to a emphatic victory at Porthill Park fifths. The home side were blown away for just 66 by the combined efforts of Amy Scerri (3-8), James Hughes (3-13) and emerging prospect Matthew Turner (4-31). Stafford reached their target for the loss of three wickets with Joseph Glayshier (31) seeing his side home.