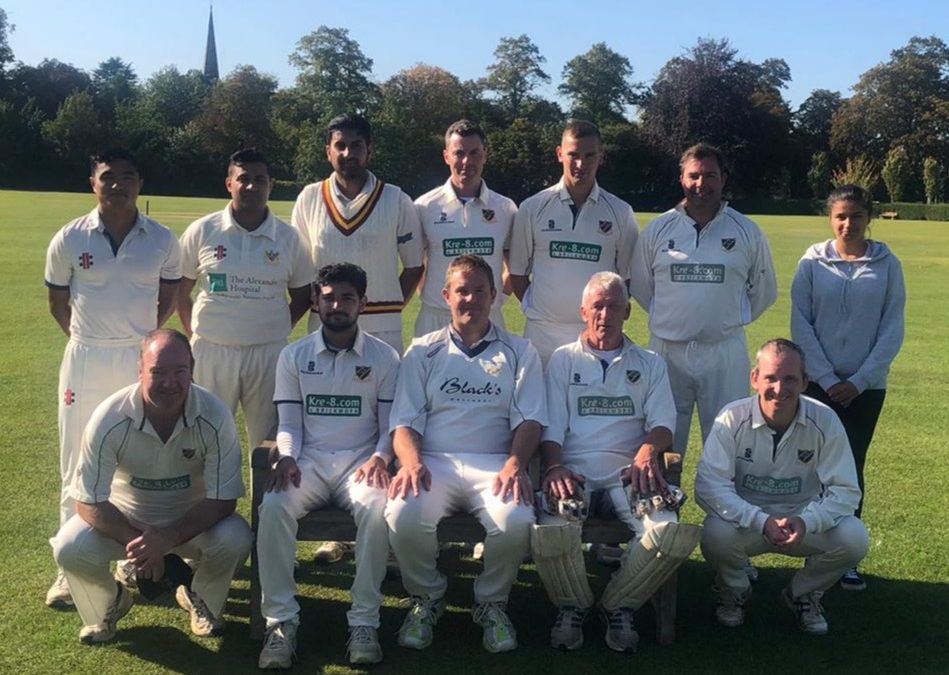 Stafford CC firsts finished a disappointing campaign on a high with an excellent victory against Alsager CC. Sanjaya Gurung (67) was in fine form as was skipper Rob James (30) as Stafford reached 210 all out batting first on a fine wicket. Stafford could’ve scored more if it wasn’t for Gareth Rowe (6-35) in blistering form as he remarkably concluded the innings with a stunning hat trick. In reply, Alsager made a steady start thanks to Sean Price (38) before an inspired Paul Freeman (5-39) took the game by the scruff of the neck. In an astonishing 7 over spell Freeman was the catalyst for Alsager collapsing from 61-1 to 69-5 with the excellent Ramiz Patel (4-48) equally impressive. Paul Pickford (30) frustrated the hosts briefly but Stafford secured their victory with Alsager eventually falling for 161 all out. Stafford now await their fate after finishing in the bottom two. They may remain in Division 2 due to division 1 Weston CC leaving the North Staffordshire and South Cheshire leagues altogether which means it’s likely only one side will face the drop. Skipper Rob James added “We’ve underachieved with the talent we’ve had and we’ve failed to grasp opportunities to win games. Hopefully we’ll remain in Division 2 and look to rebuild for next season”

Stafford CC 2nd XI suffered a narrow away loss on the final day of the season to Sandyford, but can take several positives from a fantastic season. Stafford elected to bat and it looked a great decision after Ali Siddiqi (103*) and Mark Evans (31) helped Stafford to 198-3 from 45 overs. Neil Skillcorn (3-33) was the only bowler to take wickets. However, the home side batted well thanks to Benjamin Turnock (78) and Philip Robins (72*) who saw them over the line to win by two wickets in 37 overs. Mansoor Hussain (3-26) and Sam Haynes (2-32) the pick of the bowlers for Stafford. Stafford finished fourth, narrowly missing out on promotion, but it has been a fantastic season for the 2nd XI.

Stafford CC 3rd’s elected to bat away to Newcastle & Hartshill 3rd’s as they looked to conclude the season with a good performance. Paul Wilkins (69) anchored the innings with help from Andy Kirkbride (19) as Stafford reached 153 all out from 38 overs. Owen Whittaker (3-36) and Jacob Maddock (2-33) helped to bowl the away side out. Newcastle struggled to form significant partnerships until two good innings from Simon Shenton (39) and Richard Cronie (32) but it wasn’t enough to prevent the home side from falling short of the total as they reached 142 all out from 43 overs. Andy Kirkbride (3-37) and Kumail Bokhari (2-3) the pick of Stafford attack. The 3rd XI finished fourth after some good late season form and will be very pleased with their performance overall.

Stafford CC 4th XI elected to bat and reversed the batting order in their final game of the season at home to Newcastle & Hartshill 4th’s. Steve Sutton (27*) and Jake Stewart (21) helped Stafford to a total of 141-9 from their 45 overs. Dinesh Weerasinghe Mudalige (3-41) and Peter Skinner (2-20) bowled some testing spells for the travelling side. In reply, Karl Bridgett (41) and Chris Gater (25*) helped see the away side secure a relatively comfortable victory despite some good bowling from Kyle Hanlon (2-31), who took his first senior wickets, and Tony Milner (1-1). Stafford will be content with a mid table finish and their young team can be proud of their efforts this year.