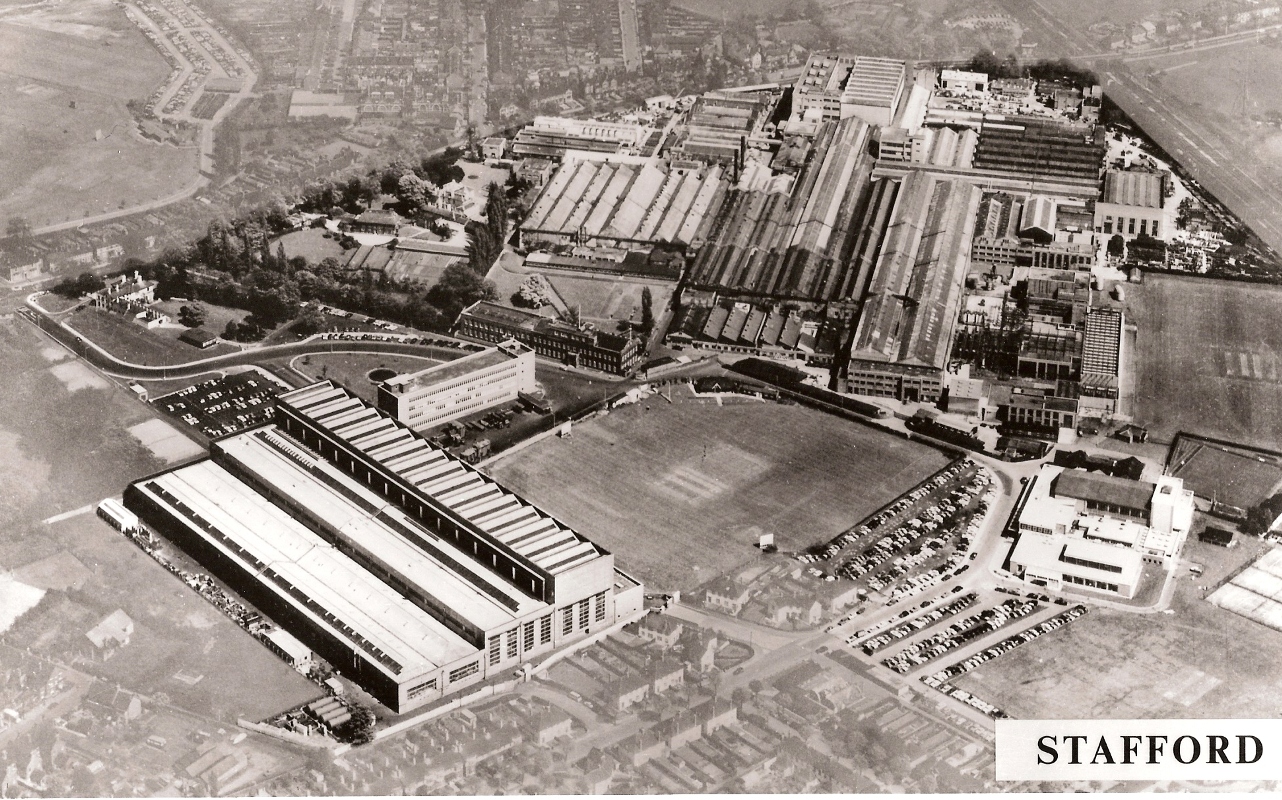 In early April 1864 a Public Meeting was held in the Guildhall, Stafford for the purpose of establishing a cricket club for the town. The Mayor, Mr J Pilling, presided and it was unanimously agreed to form such a club and to play its first game on 10th May.

It may be that Stafford Cricket Club is being modest in its celebration of 150 years old since it seems that the town club existed as early as 1847, but was not placed on a firm footing until 1864. Some twenty years earlier the Staffordshire Advertiser reported that a meeting at the Talbot Inn had founded Stafford Victoria CC to play occasional games against village clubs and on 10th July 1847 a match was played between Stafford and Trentham at Trentham Park.

The Club first played at the Lammascotes and played a game there in August 1889 against Burton, whose side included F R Spofforth, a great Australian Test cricketer. Although Spofforth wreaked havoc on the Stafford batting, a very low scoring game was only just won by a team containing Spofforth and several Derbyshire county players. This game seemed to infuse new life into the Stafford club and the committee started to look for a better ground. In 1890 came a move to the Hough, a short distance away on Lichfield Road. This new ground, which belonged to King Edward VI Grammar School, was opened by the then Mayor, Mr Mynors, in May 1890.

Apart from the years of the First and the Second World Wars when many members were in the forces and cricket was suspended, the Club became firmly established at the Hough, playing club cricket against strong sides from the south of Staffordshire and from the greater Birmingham area. Some time after the Second World War when a number of these opposing clubs joined the Birmingham League, the Club joined the Staffordshire Club Championship in order to ensure satisfactory competitive cricket for its members. Encouraged by the extra challenge of playing league cricket, the members decided in 1979 to accept an invitation to join the well-established North Staffordshire and South Cheshire League in order to experience a higher standard of competitive cricket.

Towards the end of the 1960s the activities of the Club became inhibited to some degree by industrial development. Until the period after the Second World War the Hough was a pleasant rural setting in close proximity to the town centre but then the adjourning gardens were giving way to essential factory buildings of GEC, so surrounding a rapidly isolated sports field.

Stafford Hockey Club, founded in 1876, had shared the facilities at the Hough for many years and so that club amalgamated with Stafford Cricket Club in 1965 to form Stafford Cricket and Hockey Club with the important objective of securing satisfactory facilities for both clubs in the long term. A first step was to become a constituent body of a newly-formed sports association where there were some 15 acres of land ripe for development as playing field. Unfortunately, prevailing economic conditions caused the abandonment of that scheme. However, the now amalgamated Club continued to play both sports at the Hough but with increasing difficulties being experienced by both GEC and the Club. Eventually, extensive negotiations between GEC, Staffordshire County Council and the Club resulted in the Club in 1984 becoming owners of some 6 acres of sports field in Riverway and so vacating the Hough. This new site being only a short distance from its original home in the Lammascotes.

Through the efforts of members, particularly the late Brian Westhead, the Club was able to buy a further 5 acres of sports field adjacent to the new facility giving it some 11 acres in all to provide two cricket pitches and adequate room for the necessary hockey pitches to accommodate a number of sides. Soon after this time Hockey became a sport played primarily on artificial surfaces and so the Club has been able to become temporary hosts to football and rugby during the winter months as well as providing a facility for hockey when played on grass.

In 1999 the Club was awarded a £200K grant towards a new pavilion which was completed in the millennium year. This has 6 changing rooms, a members lounge and a function room for members and guests.

Stafford Cricket and Hockey Club has a large playing membership and now operates five senior cricket teams and six senior hockey teams playing in Saturday leagues as well as extensive junior programmes and competitive games for both sports, outside of the Saturday leagues.

Whilst there are no surviving records of the date of its foundation, what evidence there is indicates that the club is as old as its soccer and rugby counterparts, both founded in 1876. By the turn of the nineteenth century it was well established as one of the leading sides in the Midlands, with a playing strength which suggests that it had been in existence a long time, before the Hockey Association had been formed in 1886. There is no doubt that at the beginning of the twentieth century it was immensely strong with two internationals, Walter Twigg and W.H.B. Bunn in its ranks. The late Walter Twigg, the king-pin of the side, was a great all round sportsmen of Stafford.

The club had a less successful time after the 1914-18 War with most of its leading players no longer available. It was only in the nineteen thirties that the club became properly revived, at the Hough. Then the Second World War saw the club’s activities suspended with virtually the entire playing strength having joined the forces.

However, the period after 1946 saw it go from to strength to strength. Sunday hockey with the Whynots became a regular feature and a week-end Hockey Festival, the first of its kind to be organised by an individual club, was inaugurated. In the 1955-56 season Stafford was probably again the premier side in the Midlands with a record of playing 23 games, winning them all except one which they drew, scoring 87 goals with 20 against. The club continued to prosper throughout the nineteen sixties. They had the Irish international, Robin Bailey, playing for them and turned out seven sides on Saturdays and two Sundays.

In 1965 came the amalgamation with Stafford Cricket Club with the objective of securing satisfactory facilities in the long term for both clubs. Stafford Hockey Club played its games at the Lammascotes in its early days but then played at the Hough after that ground was taken over by Stafford Cricket Club.

League hockey was started by the Midlands Hockey Association in 1975 and Stafford started in the Second Division. Its performance in the leagues in subsequent years has been of mixed fortunes but the first, second and third teams have gained promotion more recently. The move by the combined club to Riverway in 1984 meant that there was plenty of space for grass hockey pitches but then shortly after the leagues decided that the games should be played on artificial pitches. As a result, the club had to hire the Astroturf pitch at the University at Beaconside and other similar grounds around the county to complete its fixtures. Although the teams have to play away from their home, they still use the clubhouse at Riverway for their social and after-match hospitality.

Hockey in Stafford is now growing again and the club has six Saturday teams, a veteran’s team playing league hockey and the annual festival has been re-introduced, on grass at Riverway. There is a strong junior section with an under 18s team playing in national competitions. The members still like to go on tour to play hockey and the club has played in the Weymouth Festival each Easter for the last 50 years and travels to tournaments in Milton Keynes and Harrogate.

However, the members recognise that the club can move forward significantly if it has its own playing facilities and the long term aim is to build an Astroturf pitch on the land which Stafford Cricket & Hockey Club owns at Riverway.